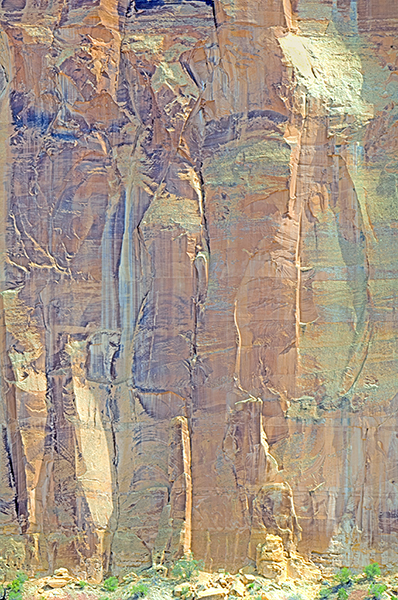 There is a 75-mile-long, north-south trending ridge of uplifted, stratified rock that rises some 18 miles west of Green River, Utah. The strata of this ridge bear a downward cant as they slope from the crest. This anticline is known as the San Rafael Swell. The jagged eastern edge of the Swell is a sandstone feature called the San Rafael Reef. The back side, essentially the western side, of the swell and the reef is a land of massive sandstone walls , rising in places many hundreds of feet nearly vertically into the dry air of Emery County. Time, wind and a little water have carved of these walls blades of rock poised to slice away at light itself

Over the millinnea, oxides and other compounds in the rocks have added their own patinas of warm and pastel color. These are visually appealing in their own right, but with the added softness and blurring of creative processing, they assume the feel and texture of watercolor gone haywire.

A focal length of 345mm from a quarter of a mile away gave me the angle-of-view and compression/magnification I wanted. An aperture of f/22 provided depth-of-field; and a shuttrer speed of 1/5th second at ISO 100 gave me an overall medium exposure. “Negative clarity” in the Adobe RAW Converter, and “negative structure” in the DoX’ Viveza filter softened the sharpness, blurred the detail and created the abstraction I was looking for. I appreciate the work of Western artists, who create in the medium of watercolor, for the wonderful effects they produce with paint and brush.

This is land administered by the Bureau of Land Management which lately seems to have bent over backwards to open the door of its charge as widely as possible to the extractive and fossil fuel industries. This is our common wealth given away so that others can profit from killing the golden goose that lives there.